AEGISTEEL is a spellpunk adventure set in the world of the Aegisteel Empire, a society of steel and magic built on the backs of its soldiers and terrible war machines. Think of it as DIRTY DOZEN meets SMOKING ACES set in a war-torn SPELLPUNK world.
When the Theln Empire captures the ancient Aegisteel forges at Nelvynnal, veteran marksman Broderick Longbarrel is released from Blackgate Prison and given one last chance for redemption. Tasked with infiltrating the ancient and impenetrable fortress, Longbarrel and five former death row inmates must succeed before the Theln can begin production of the giant war-golems that could shift the balance of the war.
See More See Less

Last Ride of the 4 Horsemen
The Apocalypse has come to the town of Promise, perhaps the last town in all creation. One by one, the Horsemen of the Apocalypse visit devastation on good Promise, challenged only by a small cadre of townsfolk - an arrogant tycoon, a socialite mayor, a hardened sheriff, and a grizzled hired gun. They are the only obstacles to the destruction of everything that keeps their town alive! 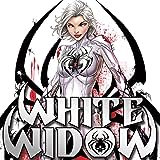 White Widow
Gabrielle Garcia was a typical American girl going to college to follow in her father's footsteps - or so she thought. One night, her father barged into her dorm room, suffering from a fatal gunshot, and injected her with... something. That was the moment she became the White Widow.