As Ultron's onslaught continues across the planet, Black Widow pays a high price in San Francisco and Captain Marvel joins Captain Britain in a fight to save London! The Fantastic Four return from a jaunt across time and space in a futile bid to save their homeworld! Otto Octavius, the Superior Spider-Man, believes it will be simple to vanquish an A.I. threat...but his vanity will prove his undoing! And in Los Angeles, Ultron's "son," the android Runaway Victor Mancha, battles to prove he is nothing like his "father." Ultron's attack batters the Fearless Defenders, Uncanny Avengers, Wolverine and more...and in the aftermath, witness a dramatic change for founding Avenger Hank Pym!
See More See Less

Age of Ultron
For years the heroes of the Marvel Universe have lived in fear that the artificial intelligence known as Ultron would one day evolve to fulfill its desire to wipe out all organic life and take over the Earth -- that day has arrived. The Avengers worst nightmare is here-- the Age of Ultron has begun. 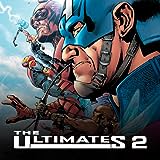 Ultimates 2
Who has leaked the most terrible secret about one of the Ultimates, and what does it have to do with Banner? Captain America takes matters into his own hands and confronts ex-Ultimates member Mighty Thor!
Secret Invasion
The shape-shifting Skrulls have secretly infiltrated every super-powered organization on Earth with one goal: full-scale invasion! It's reveal after reveal and shocking moment after shocking moment featuring the entire Marvel Universe!
Infinity
Prepare yourselves for the greatest battle for survival ever waged in the Marvel Universe as Marvel marches towards Infinity! The most dangerous threat in the Marvel Universe is back -- Thanos!
Ultimates
It's Captain America like you've never seen him before! See the Sentinel of Liberty imagined in a whole new light during one of the biggest battles of World War Two!