To a great extent, Love and Rockets is synonymous with Hoppers and Palomar... but there was always more to L&R than that. Amor Y Cohetes finally collects together in one convenient package all the non-Maggie and non-Palomar stories by all three Hernandez Brothers from that classic first, 50-issue Love and Rockets series -- a dizzying array of styles and approaches that re-confirms these groundbreaking cartoonists' place in the history of comics. The book leads off with Gilbert's original 40-page sci-fi epic "BEM" from 1981's very first issue of Love and Rockets, featuring a very different Luba and a much looser, Heavy Metal- and Marvel Comics-inspired way of storytelling. Other stories include Jaime's charming "Rocky and Fumble" series starring a planet-hopping girl and her robot; stunning one-shots such as Gilbert's Frida Kahlo biography "Frida" and his shocking autobiographical fantasia "My Love Book"; Mario's genre thrillers which take place "Somewhere in California"; Gilbert's brutally dystopian "Errata Stigmata" stories; the playful "Hernandez Satyricon," with Gilbert drawing Jaime's characters, and "War Paint," with Jaime trying out Palomar; Gilbert's light-hearted "Music for Monsters" starring Bang and Inez; and even a fantastical "non-continuity" Maggie and Hopey story "Easter Hunt" by Jaime that didn't fit into the other books.

"At an age when artists tend to have settled into refining a successful approach, the Hernandez Brothers are challenging themselves as much as they did a quarter-- century ago, and it's a joy to see them freaking out." --The New York Times
See More See Less

Love & Rockets Library
This double-feature collects two Gilbert Hernandez graphic novellas in one! In the Eisner Award-winning "Hypnotwist," a woman wanders through a series of increasingly surreal scenes, confronting motherhood, alcoholism, a sinister smiley face, and worse fates. Illustrated psychodrama as you like it! Meanwhile, in "Scarlet by Starlight": Imagine a B-movie cross between Star Trek and Heart of Darknes

Love & Rockets
The comic book event of 2016! Love and Rockets is back as an all-new, ongoing comic book series (Vol. IV for those keeping track at home)! On Jaime's side: What do you do when none of your old punk friends want to be punk any more? And just who does the evil Princess Animus think she is? (Hint: She doesn't know, she has amnesia.) On Gilbert's side: Family drama takes center stage when a Fritz disc
Love & Rockets: New Stories
Love and Rockets: New Stories #1 rebooted the beloved Love and Rockets series in 2008 as an all-new annual graphic novel length package. Jaime launches the new format with a story that's unusual even for him... A full-on, pulse-pounding super-hero yarn! Penny Century realizes her longtime dream of acquiring super-powers, but at a terrible personal cost. Now she rampages through the galaxy, half ma
Children of Palomar
The Children of Palomar is Gilbert Hernandez's much-anticipated return to the small Central American town of Palomar, more than a decade after his last "Heartbreak Soup" story. Originally released as a three-issue magazine series titled New Tales of Old Palomar in the acclaimed international "Ignatz" format, these stories are finally collected into one handsome book. All of these stories deal with 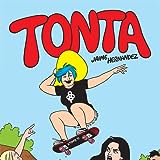