Army of Darkness vs. ReAnimator

The Army of Darkness features the crossover no one ever expected to see: Army of Darkness vs. Re-Animator! Ash Vs. West! The Ultimate Lovecraftian battle as Herbet West leaps from the literary page to fight Ash! Winner takes all! Ash finds himself committed to Arkham Asylum. It's here that he runs afoul of a rather ghoulish and creepy Herbert West... and the battle of the century begins!

Army of Darkness Vol. 2
Dynamite proudly presents the return of Ash and the Army of Darkness! Fresh from the Marvel Zombies vs. AOD Cross-over! - well, not "minty" fresh, but fresh enough - from his appearance in the Universe of the Marvel Zombies, our un-intrepid hero has returned to his own world - but what a world it's become! Evil Ash and his Deadite hordes rule the land and everywhere Ash turns is filled with mut 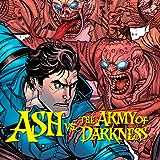 Ash Vs. The Army Of Darkness
“The name is Ash, but you can call me Mr. Williams!” Ash finds out the hard way that major corporations frown upon the dismemberment of Deadites on company property and has to seek a new form of employment. What better place for the man with the chainsaw hand to be than in the public school system! The Chosen One goes undercover as a substitute teacher to find out who is messing with the Necr
Reanimator
Dr. Herbert West, The Reanimator, returns! Setting up shop in New Orleans, the brilliant Dr. West continues his life's work: the revival of the dead by purely chemical means. To accomplish this task, he recruits Susan Greene, a young and wide-eyed pharmacologist fascinated by his macabre experiments. Initially unfazed by West's unorthodox practices (including how he funds his research - by selling
Army of Darkness Vol. 3
Ash is trapped in the old cabin and must sever the Deadite spirit anchor before the twisted creatures inhabiting the hovel feast on his soul. Somewhere in the darkest corner of the ghastly fruit cellar the long buried secret waits for him while the spirit responsible for the horrors unleashed in the woods bides its time for a chance at the Chosen One and its own unworthy salvation. It's a return t