A Beckon to the World...

With the encampment in complete ruin, their ongoing battle has sent ripples throughout the region. Time is paramount. Allies and enemies set their sights on the battle, but great expanses of mountain and forest still stand between them.

The Dark Legion lines the perimeter of the crater where their temple once stood. All hopes lie in Zenzorra - a manufactured tool designed to be the next vessel of their own salvation. Wielding an ancient weapon and enchanted armor that reacts to her own emotions, she leads the fight against Sekken. The battle is long, but drawing to an end. Both, exhausted of energy, push themselves to their very limits to win the battle - more than just their own lives are at stake.

As everyone watches in fear as Sekken and Zenzorra fight to the death, Emerald Moon stands trapped inside a temporal world. Their only option is fight the leader of the Tamiran nobles to win their freedom back. While his power is multiplied, their strength is halved. It's an uphill battle, where even if they do win, they still have no chance of escape. 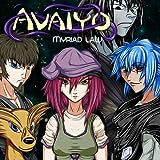 Avaiyo: Myriad Law
The World of Xiltria... After centuries of slavery under the oppressive rule of the Tamiran Empire, the people of Xiltria were finally able to regain their freedom. It's been nearly eight years since the Era of Slavery, and the tides of peace are beginning to wash away. Subtle remnants of the exiled Tamiran Empire still live on and are starting to give way towards a new threat. One such thre