The beloved comic strip is finally given the Fantagraphics treatment. Barnaby's deft balance of fantasy, political commentary, sophisticated wit, and elegantly spare images expanded our sense of what comic strips can do. Barnaby revolved around a precocious five-year-old named Barnaby Baxter and his fairly godfather Jackeen J. O'Malley. Yet O'Malley, a cigar-chomping, bumbling con-artist and fast-talker, was not your typical protector. His grasp of magic was usually specious at best, limited to occasional flashes, often aided and abetted by his fellow members in The Elves, Leprechauns, Gnomes, and Little Men's Chowder & Marching Society.

"I think, and I'm trying to talk calmly, that Barnaby and his friends and oppressors are the most important additions to American arts and letters in Lord knows how many years." -- Dorothy Parker

Dinomania
Winsor McCay, the creator of Little Nemo in Slumberland, is internationally renowned as a pioneer in comics and animation. But author Ulrich Merkl's dedicated sleuthing has unearthed a never-published strip by McCay that was lost following the artist's untimely death. Titled simply Dino, it opens a surprising new window into McCay's life and work and showcases his exquisitely beautiful and delicat
Creeping Death from Neptune
This is the first of two volumes reprinting copious amounts of comics stories and recounting the career of cartoonist Basil Wolverton. Based on his correspondence and journals, the biographical portion of the books follows Wolverton from childhood to adult day-to-day life as freelance cartoonist, itinerant handyman, persistent contest enterer, and local pastor of the Radio Church of God. Wolverton 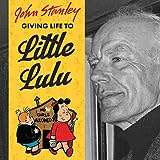 John Stanley: Giving Life to Little Lulu
This is a deluxe, full-color, coffee table book biography; the first of one of America's greatest storytellers. It's filled with beautifully reproduced artwork from the comic books Little Lulu, and his creations Melvin Monster and Thirteen(Going on Eighteen); rare drawings and cartoons; and never-before-seen photographs. Bill Schelly tells Stanley's life story through interviews with his family, f
Basil Wolverton's Culture Corner
Did you ever wonder how to stop brooding if your ears are protruding? Or how to indulge yourself and snore without being a bore? Or for the masochists among you, how to sit on a tack? Or for the narcissists, how to contemplate the back of your pate? Or something as simple as how to get out of bed gracefully? Or something a bit more challenging like how to boot a fly off your snoot? Or, if you’re