After taking part in a historic heist — 52 simultaneous robberies at the same time, in the same city — May and Eugene are now on the run not only from the law and double-crossed former accomplices, but also their violent past. What makes these criminals so surprising is that they are a young mother and her preteen son. Thus begins the intense, yet touching, Bastard, Max de Radiguès’s Fantagraphics debut and a book already nominated for the prestigious noir award at the 2018 Angoulême International Comics Festival. Bastard traces the deadly escape of May and Eugene as they crisscross the United States, encountering mysterious truckers, ambitious bandits, and senior citizens living off the grid in the Southwest. The duo race to get to their stolen cash and simply survive as masterful flashbacks clue us into how they got into this deadly situation in the first place. Both bloody and tender, de Radiguès focuses on the familial relationship as much as the exhilarating plot elements, and his clear-lined style adds depth to the brutality as well as the moments of maternal love. Full of plot twists and high tension, Bastard is a hard-boiled page-turner introducing an adolescent anti-hero that you’re sure not to forget.

Hobo Mom
A cross-Atlantic collaboration, Hobo Mom was drawn simultaneously. Both cartoonists’ clean line styles fit together perfectly to tell the story of Tom, who lives a simple life with his pre-teen daughter, Sissy. Her mother, Natasha, who left to hop trains and has become a vagrant, shows up on the doorstep of the family she abandoned years ago. There, Natasha finds an upset husband (who is still
Fante Bukowski
Collects all three volumes of the Eisner Award-nominated graphic novels series, which skewers a self-important male literary poser. Living in a beat-up motel and consorting with the downtrodden as well as the mid-level literati, Fante Bukowski must overcome great obstacles ― a love interest turned rival, ghostwriting a teen celebrity's memoirs, no actual talent ― to gain the respect and adorat
Fuzz and Pluck
Fuzz & Pluck: Splitsville tells the hilariously bizarre adventures of Pluck, an irritable and featherless rooster, and his best pal, the awkwardly unsocialized but lovable teddy bear known as Fuzz. These two usually inseparable and co-dependent misfits find themselves suddenly separated and alone. Pluck vows to establish his place in the world's pecking order by becoming a champion gladiator, whil 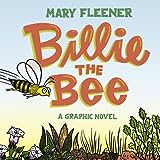 Billie The Bee
In expressive black-and-white lines with forays into bold Cubism, Fleener tells the story of Billie the Bee, who is too big, too fast, and has far too much personality to simply collect pollen. So, the Queen Bee (with ulterior motives) sends Billie out to patrol the woodlands and marshes of San Diego for danger. She encounters a heron on hallucinogens, dirty joke-telling turtles, and humans illega