Mr. Whisper, the man without a shadow, was brutally murdered twenty years ago, and yet...somehow he has returned. And now the mysterious figure stalks Gotham City's most notorious crime lords, killing them off, one by one. With the Underworld of Gotham in chaos, the Dark Knight is drawn into conflict with Mr. Whisper, only to discover that this immortal killer has a terrifying connection to Bruce Wayne's youth. Despite this shocking revelation, the Caped Crusader must find a way to stop the unkillable man from unleashing a lethal plague on Gotham.

Writer Grant Morrison (MULTIVERSITY, BATMAN INCORPORATED) on his first Dark Knight story ever, and artist Klaus Janson (SUPERMAN, BATMAN: DEATH AND THE MAIDENS) tell the tale of Batman as he attempts to stop a madman from sacrificing the soul of a city and its people. Collects BATMAN: LEGENDS OF THE DARK KNIGHT #6-10 and includes scripts as well as interior page and cover sketches.
See More See Less

Batman: Legends of the Dark Knight
A rotating roster of the world's top comic book creators deliver unique tales starring Batman in this acclaimed anthology series! Spanning the career of the Dark Knight, these stories celebrate all aspects of the World's Greatest Detective.

Batman: Shadow of the Bat
Nightwing tries to free Batman from Arkham Asylum, only to discover why he's really trapped inside. Meanwhile, Jeremiah Arkham succumbs to his heritage of madness! "The Last Arkham" part 3.
Detective Comics (1937-2011)
Bruce Wayne has trained his body beyond the peak human perfection; he's trained his mind to focus on minute details to deter criminal enterprises. As the Batman, he's a symbol of terror, striking at the hearts of criminals and villains across the globe.

Batman: Dark Victory
Even in the aftermath of THE LONG HALLOWEEN, Batman finds no peace. Gotham City is caught in the middle of a battle between what's left of the Falcone mob and freakish villains such as the Joker, Mr. Freeze and Catwoman. 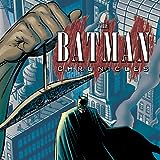 The Batman Chronicles (1995-2001)
A Batman title offering an expanded view of the Dark Knight's world and its menagerie of strange inhabitants--featuring multiple storylines and rotating creative teams all exploring Gotham City and the Bat-family!