BEARS HAVE DECLARED WAR ON ALL HUMANS

From Axe Cop creator, Ethan Nicolle. This is he first volume collection of the web comic series Bearmageddon.

When Wow Mart employee, Joel Morley and his slacker friends ditch society to live in the forest, they discover a mass exodus of bears heading back to civilization to declare war on mankind. They enlist the help of a half-feral mountain man named Dickinson killdeer to aid them in returning to the city to find their families. But With bears mutating, growing tentacles and invading in massive numbers, it looks like the end of civilization as we know it.

"Bearmageddon wields a prescience that is both hilarious and terrifying, as Ethan Nicolle masterfully spells out the ursine demise that is coming to us all." 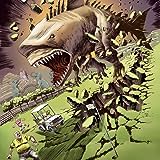 Sharkasaurus
'Faith and facts collide on a Creationist themed golf course when the daughter of a widowed creationist falls for the adopted son of a gay paleontologist. Unbeknownst to the lovers a prehistoric dino-shark has emerged from hibernation leaving a trail of death and destruction. Will the creationist and paleontologist settle their ideological differences or will Sharkasaurus devour them all?' The 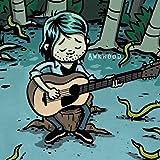 Awkwood
Stuck in a boring office job. Living with a deadbeat flatmate. Surviving from payday to payday. Relentlessly pursued by giant monsters. Liam's got the talent to take his musical ambition further and escape everything, if only he could gain the confidence to stare down his inner Bad. When his psychedelic therapy visions burst forth into flesh, Liam must face them, and himself, before more than 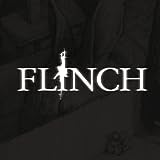 Flinch
Stories to inspire wonder and question the darkness inside us all. Flinch is an anthology of stories by established and emerging creators pertaining to their interpretation of the concept of 'flinch'. 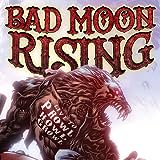 Bad Moon Rising
It's Hell on Wheels when Sheriff George Waggner is killed. His son Teddy returns home to discover that the small town has become victim to a rash of brutal murders. The investigation points to the nomadic motorcycle gang, the Lunar Cycles, that has set-up camp just outside of town. The arrival of werewolf hunter Noah Packard confirms that the bikers are more than they claim to be. Get ready fo