The continued adventures of the loveliest and deadliest crime-fighters in the DCU from the critically acclaimed superstar team of Chuck Dixon, Greg Land and Drew Geraci.

The Birds of Prey have become a tight-knit partnership, even though Black Canary has never seen Oracle face to face. But their friendship and their lives could be cut short when Black Canary finds herself in the middle of a deadly hunt led by the ruthless cult leader Kobra for a long-forgotten piece of Russian technology. And as Black Canary fights for her life, Oracle has her own troubles when the U.S. Army begins tracking down the person hacking into their systems. All of this, plus guest stars Batman, Nightwing and-Guy Gardner?

Collected for the first time in chronological order: BIRDS OF PREY #1-11 and BIRDS OF PREY: RAVENS #1.
See More See Less 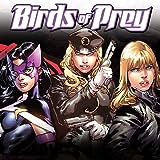 Birds of Prey (2010-2011)
The Birds are back--brought together once again by fan-favorite writer Gail Simone (WONDER WOMAN)! Following the events of BRIGHTEST DAY, Black Canary, Huntress, Lady Blackhawk and Oracle reunite, and add two new birds to the flock: Hawk and Dove!
Catwoman (1993-2001)
The feline fatale of the DC Universe and one of Batman's most famous foes, steals the spotlight with her very own series, slinking her way between the lines of hero and villain.
Nightwing (1996-2009)
Dick Grayson stars in his very own series as the high-flying acrobatic super-hero Nightwing! After years of serving alongside the Dark Knight detective through the streets of Gotham City, Nightwing branches off on his own as the sworn protector of Bludhaven!
Robin (1993-2009)
With Batman at his side or off on his own, Tim Drake protects the streets of Gotham by night while simultaneously trying to lead a normal teenage life by day. Writer Chuck Dixon returns once more to the Boy Wonder Tim Drake—this time for the young hero's very own ongoing series!