Today, the planet Venus is a literal hell of furnace-like temperatures and dense, poisonous atmosphere. But millions of years in its past, Venus teemed with life and with a civilization far advanced to our own. The Nemisis supercomputer controls government functions, with bioroid ""executors"" created to carry out the system's utopian edicts. But trouble brews even in paradise, as different executors vie for control of Nemesis, forcing the governing system to secretly create Duna Typhon, a super-bioroid "sleeper," raised among the human populace, ready to use her awesome powers should Nemesis be co-opted to turn paradise into paradise lost.

From the imagination of Ghost in the Shell creator Shirow Masamune comes his first published series, Black Magic, a sweeping science-fiction epic that introduces many of the themes and ideas that influence all of Shirow's work. 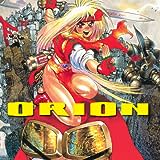 Orion
In the mighty Yamata Empire, magic and technology are one and the same. Now, the Empire is preparing its ultimate feat of psycho-science: the destruction of all the negative karma in the galaxy! But will this mystical purification be the salvation of humanity--or the trigger of its ultimate destruction? Only one being can save the Empire from its folly: Susano, the God of Destruction. Wild, arroga
Dominion
Welcome to the future, where the norms are vast bio-constructed cities, air toxic enough to force citizens to wear oxygen masks, and crime so severe that the cops drive tanks! When a mysterious winged girl with the power to cleanse the poisoned air is kidnapped by the villainous Buaku, police mini-tank commander Leona Ozaki, her tank Bonaparte, and her lovesick partner Al must confront the arch-cr
Appleseed
World War III is over, and nomad soldier Duenan Knute and her cyborg partner Briareos struggle to survive in the abandoned cities and demilitarized zones of the post-war wasteland, the "Badside." Matters appear on the upswing, however, when they are found and brought to Olympus, an urban utopia and centerpiece for the reconstruction of civilization. Duenan and Bri join the Olympus police, a force 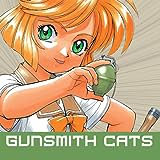 Gunsmith Cats Revised Edition
Rally Vincent and Minnie May Hopkins are experts in their respective fields of marksmanship and explosives, but they're so cute you'd never know. Neither would the perps unlucky enough to be their hunted. Presented for the first time in the authentic Japanese format, these giant-sized volumes are action-packed, unretouched, and sure to please the gun-nuts, auto buffs, and manga maniacs!