The Maroons strike back! You watched them steal the M’Kraan Shard from the empire. Now the rebels are ready to show who they really are. “He Who Put the Blade Where It Belonged” retakes his rightful title, and the Black Panther is reborn! With the Panther once again among their ranks, they’re certain of victory — but at what cost? T’Challa faces a creature of nightmare and journeys to the home world of the Between, the place where N’Jadaka’s rise began! But what he learns there will lead him to question the rebellion’s very foundation. Will Bast’s champion ever be fully restored? Learn at last how the king of Wakanda found himself a slave in the Vibranium mines of a half-familiar world as T’Challa’s lost past is revealed!
See More See Less

Black Panther (2018-)
Collects Black Panther (2018) #1-6. A bold new direction for the Black Panther! For years, T'Challa has protected Wakanda from all invaders. Now, he will discover that his kingdom is much bigger than he ever dreamed. Across the vast Multiverse lies an empire founded in T'Challa's name. Readers caught a glimpse of it in MARVEL LEGACY #1. Now learn the truth behind the Intergalactic Empire of Wak

Captain America (2018-)
Collects Captain America (2018) #1-12 and material from Free Comic Book Day 2018 (Avengers/Captain America) #1. Acclaimed BLACK PANTHER scribe Ta-Nehisi Coates takes on the Sentinel of Liberty! For more than 70 years, Captain America has stood in stalwart defense of his country and its people. But in the aftermath of Hydra’s brief takeover of the nation, Cap is a figure of controversy carryin
Guardians Of The Galaxy (2020-)
Collects Guardians of the Galaxy (2020) #1-5. Someone has to guard the galaxy, but who will accept this bizarre new mission? Once, the Guardians of the Galaxy were a team of misfits. Now they’re a family, and they’ve earned their peace. But the universe is not a peaceful place — and it’s only getting worse. The Great Empires are in turmoil. The rule of law is dead. And amidst the chaos, 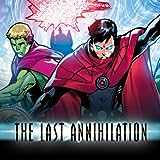 The Last Annihilation (2021-)
THE LAST ANNIHILATION will unfold throughout the summer starting in July with GUARDIANS OF THE GALAXY #16 and S.W.O.R.D. #7.
Black Panther And The Agents Of Wakanda (2019-)
Collects Black Panther And The Agents Of Wakanda (2019) #1-6. Our first line of defense in a world under siege from all sides! From the pages of Jason Aaron's AVENGERS come the Agents of Wakanda — assembled by the Black Panther to fight the foes that Earth's Mightiest can't! Vampires. Aliens. Angry fish kings. T'Challa's handpicked Agents can handle it all. But as Wakanda makes waves on the w