THE CONCEPT: Sex and Violence have never looked so... OLD. Meet the government's last line of defense when it comes to the really messy parts of keeping the world safe, BRIT. He spends his time passing down the wisdom of the ages and giving beatings from the day. When super-powered menaces threaten our home soil, send in Brit. When mad dictators take over neighboring countries in order to control their resources, send in Brit. When aliens take over the moon, planning to use it as a staging ground for an all out invasion... bomb it to hell with nuclear missiles... then send in Brit to clean up the leftovers. Brit is a one man killing machine, indestructible, unstoppable... and eligible for a senior citizens discount.
THIS ISSUE: "Send in Brit." It's an order that has echoed the halls in the most secret areas of the Pentagon many times over in the last 40 years, but as they say... all good things come to an end. When the government feels that their most useful asset has come to the end of his usefulness, will it turn their most powerful weapon against them? He's fought armies, monsters, aliens, and super-villains but when the people that have been giving Brit his orders suddenly become his enemies... his entire world is turned upside down and the only solution he can think of for all his problems is killing a lot of people. Brought to you by the team behind hit Indy sensation Battle Pope. Brit promises violence like you've never seen in the pages of a comic before!
Needless to say, Mature readers only.
See More See Less

Brit
Sex and violence have never looked so...old. Meet Brit, the government's last line of defense when it comes to the really messy parts of keeping the world safe. When super-powered menaces threaten our home soil, send in this one-man killing machine: He's indestructible, unstoppable, and eligible for a senior citizen's discount. Brit and Jessica are having a good time raising their new son, Bri 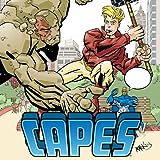 Capes
A three-issue mini-series following the misadventures of a super-powered team whose members are dedicated to protecting the weak ... while turning a profit. Kirkman's Invincible has quickly become one of Image's biggest hits, and Englert's work on a recent Savage Dragon back-up story impressed critics and readers alike, making this a title to watch closel
Tech Jacket
The Geldarians are a race of incredibly intelligent, yet physically weak and fragile beings. To compensate for their frailty they have invented the "Tech Jacket," a vest that every Geldarian is equipped with upon birth. Each jacket grows and matures with its host, specializing in tasks that the host will find most useful. A fully developed Tech Jacket is considered to be one of the most powerful w
Guarding the Globe
The Guardians of the Globe are BACK in an all-new, all-exciting ongoing series! Your favorite heroes - Brit, Outrun, Invincible, Robot, Yeti, Kaboomerang, and more -face new challenges of epic proportions in stories by the all-star team of PHIL HESTER & TODD NAUCK! 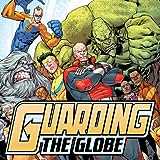 Guarding the Globe
As the VILTRUMITE WAR rages on within the pages of INVINCIBLE, the ranks of the Guardians of the Globe are suddenly depleted. The world is in danger, and the team is in search of new blood. It's the biggest recruitment drive since Omni-Man slaughtered the original members. But will the new Guardians of the Globe be ready in time to stop The Order? This series is a can't-miss action extravaganza!