Malcolm Mason & Melanie Mason are two teenagers who wrestle with the normal difficulty of adolescent life. They face the peer pressure, the struggle to fit in, the bullies, the toils of school work & the challenges of meeting the expectations of their parents. Along with those struggles, they deal with the many challenges of living in Da-Hood, amongst the Gang Banging, Car-Jacking & Inner City Crime. But their biggest struggle is triumphing over these difficulties while confronting the additional perils as two teenage super-heroes. They wrestle with the dangers of fighting Evil Mad Scientist,
Ruthless Super-villains, and Killer Robots.

Consequently, their undying faith in God is put to the ultimate test. But can they overcome their daily teenage struggles and survive the unending attacks from their super-powered enemies? Will this be something they’ll be able to overcome? They confess they’re more than conquerors.
See More See Less 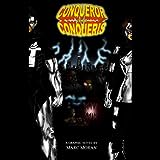