The year is 2314, and the grandson of Steve Rogers lives in the utopian America of which his ancestor dreamed. The legacy of Captain America has been realized — but something sinister lies beneath the surface! A family quest leads Jack Rogers into the bowels of the Earth, far from the idyllic surface — and a meeting with the descendant of another notable Marvel hero! Jack is a wanted man on a desperate search for a cure to his own son's fatal disease — and once it's found, a legend will be reborn! But will the arrival of America's greatest champion be enough to reset the course of history? It's a very special look into the tomorrow of Captain America!
See More See Less 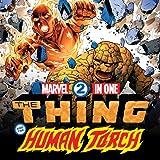 Marvel Two-In-One (2017-2018)
Collects Marvel 2-In-One (2017) #1-6. A classic title from Marvel's storied history is back at last — and it's fantastic! With Reed and Sue Richards gone and presumed dead, Johnny Storm and Ben Grimm reunite in a bid to find their new place in the Marvel Universe. But something is wrong with the Human Torch, and only the Thing can help him! And what monumental secret has Victor Von Doom been
Infinity Countdown (2018)
The Saga of the Infinity Stones begins! As the Infinity Stones reappear around the cosmos, the ultimate race for power is on!! Battles will be fought, blood will be spilled, lives will be lost... all as the greatest cosmic heroes and villains vie for possession of the Power Stone, towering over a remote asteroid, somehow grown to the size of a building. Watch as the path to Infinity opens before y
Avengers (2016-2018)
The time has come! Their ranks shattered by Civil War, their spirits weighted down by a toll both personal and spiritual, Earth's Mightiest Heroes must find the resolve to stand united one final time against their greatest foe! Captain America! Thor! The Vision! The Wasp! Spider-Man! Hercules! When the dust settles, not a one of these valiant heroes will make it to the final page alive! This is KA 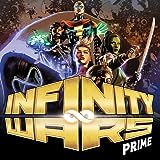 Infinity Wars Prime (2018)
Trust us, Marvel Fans – before the INFINITY WARS begin to rage comes this shocking chapter of the cosmic saga that you will not want to miss! The ramifications of this issue will be felt throughout Infinity for years to come! We can say NO MORE!