Carnage goes to sea to see the world — and kill it! When South African 16-year-old Jabulile van Scotter started sailing around the globe, she didn’t plan on a symbiotic, psychopathic stowaway! Evolved to the next level, the serial killer has plans to turn the oceans red with blood — but the Anti-Carnage Task Force is following the trail of bodies left in his wake. Do Man-Wolf, Eddie Brock & Co. have what it takes to stop this darker-than-ever Carnage? Probably not if one of them turns traitor! Cletus Kasady’s thirst for yet more power will take him to a mysterious and secluded island, and its secrets may be even more terrifying than him. As Carnage lives up to his name on the high seas, we’re gonna need a bigger boat!
See More See Less

Carnage (2015-2017)
Get ready to scream! Carnage, the homicidal symbiote is back, and he's leaving a trail of bodies behind him. The FBI is hot on his trail, with a different playbook since their serial killer is a super villain. They're equipped with the latest sonic tech and a team including military hero/astronaut John Jameson and a reformed Eddie Brock/Toxin! But when Carnage escapes into an abandoned coal mine, 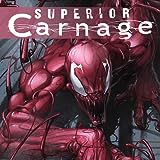 Superior Carnage
Locked away in an asylum, it looks like Carnage is gone for good... but his fellow inmates have other plans -- will they successfully wake the monster Or will this hideous experiment create the most powerful, dangerous, maniacal Carnage yet -- a Superior Carnage! 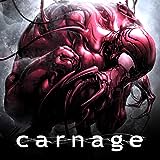 Carnage
Carnage is back, with the Amazing Spider-Man and the Invincible Iron Man first on his hit list. But just why and how has Carnage returned, and how many of Marvel's heroes will it take to stop him?

Minimum Carnage
Cletus Kasady is back to doing what he does best: killing. However, he seems to be dancing to someone else's directions this time. The story that will bring together Carnage, Venom, and the Scarlet Spider begins here!
Carnage USA
Spider-Man and the Avengers must go on a brutal hunt to capture Cletus Kasaday before a small town in the American heartland falls under his mass-murdering spell!