What kind of whack job would put on a mask and a skin-tight suit and head out into the city after midnight? I mean, what is this guy really up to? What pathology, what perverse proclivity are we dealing with here? Is he fighting crime? Of course not, he's just going clubbing-and he's frankly perplexed when the aggressive bar flies & drunks single him out.  The guy in question is Manx, a costumed cat man. Rich but unfulfilled, Manx goes to Dr. Grippo, a sultry lady shrink from Eastern Europe, to figure out his life. All hell breaks loose when Manx reveals to the amorous Dr. Grippo that he has fallen for Delia, a hottie he picks up on one of his late night excursions.  Romance! Violence! Weed! Adventure! Alcohol! Twists! All these things abound in Lafler's charming Cat Suit. 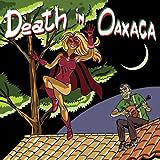 Death In Oaxaca
This surreal adventure from the creator of Dog Boy and Bughouse serves up Lucha Libre wrestlers and an ancient vampire who prefers chicken. Two expats move to remote Oaxaca, the fabled highland city in southern Mexico. Rex, earnest yet duplicitous, flees from mid-life crisis and fear of death. Beautiful Gertie, cynical but honest, is just plain bored and craves adventure.