Because the world still needs heroes, they are…the Champions! In the wake of the second superhuman Civil War, the three youngest Avengers — Ms. Marvel, Nova and Spider-Man — quit the team and strike out on their own! With Viv Vision and the Totally Awesome Hulk by their side, these young heroes are determined to change the world their own way — and they're only the beginning! Their ideas quickly become their ideals, and soon the time-traveling young Cyclops joins their movement — but not all of his new teammates are glad to see him! Hopefully the Champions can sort out their differences in time to face down their new rivals, the Freelancers, and help overthrow Hydra's Secret Empire!
See More See Less

Champions (2016-2018)
Following the fallout of CIVIL WAR II, Avengers Ms. Marvel, Nova and Spider-Man strike out on their own — joined by Cyclops, Viv Vision and the Totally Awesome Hulk! Six young heroes determined to change the world — and they're only the beginning!

Champions (2019)
Collects Champions (2019) #1-6. The world still needs heroes — and there are heroes all over the world! A new era begins as the Champions go global! Under Ms. Marvel's leadership, an army of young adventurers is saving people and improving lives across the planet — but something sinister lurks beneath the surface. A dark secret that could destroy the team and everything they stand for! When 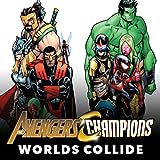 Avengers & Champions: Worlds Collide
Collects Avengers #672-674 & Champions (2016) #13-15. WORLDS COLLIDE! It starts here--the long-promised clash between the Avengers and the Champions! The countdown has started as the High Evolutionary sets the Earth on a collision course with destruction! The Avengers and the Champions are ready to meet this threat--but not everyone agrees how best to combat it! Since they were old enough to sa
Ms. Marvel (2015-2019)
Look out world, Kamala Khan is officially an Avenger! Yup, the dream to end all dreams has happened for Kamala. She’s toe to toe with the best of the best, but will being one of Earth’s mightiest heroes be everything she imagined? Is being a celebrity hero as wonderful as Kamala has hoped?
All-New, All-Different Avengers (2015-2016)
The Avengers are dead--long live the Avengers! Earth's Mightiest Heroes--Captain America, Thor, Vision, and Iron Man--are living separate lives, not tied to any team--but when a threat from beyond the stars targets our world, fate draws them together once more, alongside Nova, Ms. Marvel, and Miles Morales a.k.a. Spider-Man!