Things are looking up for Tony Chu, the cibopathic federal agent with the ability to get psychic impressions from the things he eats. He's got a girlfriend. He's got a partner he trusts. He even seems to be getting along with his jerk boss. But his ruthless ex-partner is still out there, operating outside of the law, intending to make good on his threats against Tony and everybody Tony cares about. It's just a matter of time before their investigations collide, blood spills and-inevitably-body parts are eaten. Presenting the third storyline of CHEW, the follow-up to the New York Times Best Sellers 'Taster's Choice' and 'International Flavor.' Check out the strange and darkly comic series about cops, crooks, cooks, cannibals and clairvoyants. Winner of the Eisner Award for Best New Series and nominated for Eagle and Harvey awards to boot!
See More See Less

Chew
Tony Chu is a cop with a secret. A weird secret. Tony Chu is Cibopathic, which means he gets psychic impressions from whatever he eats. It also means he's a hell of a detective, as long as he doesn't mind nibbling on the corpse of a murder victim to figure out whodunit, and why. It's a dirty job, and Tony has to eat terrible things in the name of justice. And if that wasn't bad enough, the governm 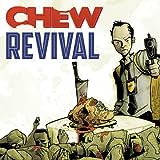 Chew/Revival
TWO GREAT TASTES THAT TASTE REALLY WEIRD TOGETHER! Tony Chu heads to Wisconsin in two all-new original tales by the creative teams of both critically acclaimed titles! A great jumping-on point for readers who've heard how damn good these titles are on their own, and a twisted delight for those already in the know!
Farmhand
Jedidiah Jenkins is a farmer—but his cash crop isn't corn or soy. Jed grows fast-healing, plug-and-play human organs. Lose a finger? Need a new liver? He's got you covered. Unfortunately, strange produce isn't the only thing Jed's got buried. Deep in the soil of the Jenkins Family Farm, something dark has taken root, and it's beginning to bloom. From ROB GUILLORY, Eisner-winning co-creator an
Nailbiter
Buckaroo, Oregon has given birth to sixteen of the vilest serial killers in the world. An obsessed FBI profiler investigating the town has suddenly gone missing, and now an NSA Agent must work with the notorious serial killer Edward "Nailbiter" Warren to find his friend and solve the mystery of "Where do serial killers come from?" "If Josh died I wish he'd leave NAILBITER to me in his will so I co
Revival
For one day in rural central Wisconsin, the dead came back to life. Now it's up to Officer Dana Cypress to deal with the media scrutiny, religious zealots, and government quarantine that has come with them. In a town where the living have to learn to deal with those who are supposed to be dead, Officer Cypress must solve a brutal murder, and everyone, alive or undead, is a suspect.