Cloak And Dagger: Crime And Punishment

Created by the underworld - sworn to destroy it! Cloak and Dagger hit the streets to fight organized crime and super villainy! When they set their sights on the Kingpin, Spider-Man thinks they're going too far, but his webs can't rein them in! Plus: The Punisher's on the prowl, and it's a problem for everybody! Guest-starring the Black Cat, the New Mutants and the Spidey supporting players of yesteryear!
See More See Less

Peter Parker, The Spectacular Spider-Man (1976-1998)
Peter Parker and his clone Ben Reilly join forces in an effort to defeat the Traveler! 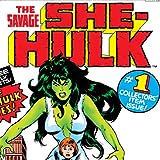 Savage She-Hulk (1980-1982)
Collects Savage She-Hulk (1980) #1-14. When criminal defense attorney Jennifer Walters is shot by a mob hitman, her cousin saves her life with a blood transfusion - but that cousin is Bruce Banner, and his gamma-irradiated blood turns her into the Savage She-Hulk! Suddenly she's a mean, green lawyering machine, and criminals the world over had better watch out. Now, experience She-Hulk's advent
Defenders (1972-1986)
The Defenders are cast across the globe in this explosive annual! In Washington D.C., Doctor Strange must convince the President that Nebulon’s Mind Control Movement is not in the public’s best interest. Power Man and Valkyrie investigate mysterious deaths in India, while Nighthawk and Red Guardian take on a violent faction in France!