Cruisin' with the Hound: The Life and Times of Fred Toote

Series
Cruisin' with the Hound: The Life and Times of Fred Toote

"They were all there, the pimps, the fags, the whores, the curious, the alcoholic, the weird of the late '50s... blues lovers, Canadian bikers, thrill seekers, junkies, insomniacs, hepcats..." So begins "Down at the Kitty Kat," one of the 20-plus never-before-collected memoirs and yarns by Spain Rodriguez, one of the original gang of Zap Comix provocateurs. Although he's best known for his two-fisted tales of the chopper-riding Trashman, Spain's blunt graphic style and uncompromising gift for caricature, rendered in eye-punishing slabs of black and white, work equally well for more subtle fare -- such as these memoirs of his misspent youth. Cruisin' with the Hound ranges from Spain's days as an innocent young churchgoer to his time as a member of the Road Vultures motorcycle gang, with stops along the way for his discoveries of science fiction and other, more adult pursuits ("The Birth of Porn") -- as well as the "The Education of an Underground Cartoonist," describing his journey from a pimply Captain Marvel-reading scribbler to his arrival as a professional artist. But the heart of this collection is a cycle of stories ) set during Spain's teenage days in the 1950s, often featuring the doomed, dot-eyed Fred Toot.

Barnaby
The beloved comic strip is finally given the Fantagraphics treatment. Barnaby's deft balance of fantasy, political commentary, sophisticated wit, and elegantly spare images expanded our sense of what comic strips can do. Barnaby revolved around a precocious five-year-old named Barnaby Baxter and his fairly godfather Jackeen J. O'Malley. Yet O'Malley, a cigar-chomping, bumbling con-artist and fast-
Creeping Death from Neptune
This is the first of two volumes reprinting copious amounts of comics stories and recounting the career of cartoonist Basil Wolverton. Based on his correspondence and journals, the biographical portion of the books follows Wolverton from childhood to adult day-to-day life as freelance cartoonist, itinerant handyman, persistent contest enterer, and local pastor of the Radio Church of God. Wolverton 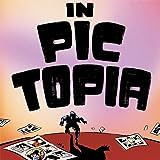 In Pictopia
In Pictopia is the legendary comic created in 1986, written b y the era's most adventurous mainstream comics writer and drawn by a bevy of indie cartoonists — helmed by Don Simpson, with Mike Kazaleh, Pete Poplaski, and Eric Vincent. Presented here for the first time, scanned from the original line art and full-color painted boards, in an appropriately oversized format. Pictopia is the allegoric
Rick Veitch's The One
The classic revisionist superhero saga that predates Watchmen and The Dark Knight Returns and presented a shocking worldview that almost predicted today's political climate! Rick Veitch's groundbreaking series has been called the last word on superheroes. It is a world-spanning, continent-crushing, over-the-top adventure story that brings the United States and Russia to the brink of annihilation..