With tensions between Turkey and Iran barely abated, Douglas Pistoia and his unit of contractors are deployed again, this time to the border of Argentina and Chile, with the dangerous mission having all the makings of a ratings hit.

But his media stardom makes his bosses nervous, and his fiance must watch nervously at home as his mission is broadcast live on television! From the creators of the Eisner Award-nominated The Killer comes this look at the near future of war and the media.
See More See Less

Cyclops (Archaia)
2054. Douglas Pistoia is desperately looking for work, but only a private military contracting firm, Multicorps Security, has offered him a job. Soon after he signs up, the UN decides to outsource its peacekeeping missions, and Multicorps wins the first bid, propelling Douglas into a war that is not his own-a highly sophisticated war broadcast worldwide by the soldiers themselves thanks to the mic

Dead Run
The end isn't near, it's here. America has become a wasteland, leaving the few cities that remain transformed into impenetrable fortresses. Beyond these walls lies The Zone, a brutal, plague-ravaged landscape stretching from one city to the next, populated by mutants, monsters, and warring factions of survivors driven insane by disease and starvation. Only the very brave or the very foolish volunt
Lucid
Dark forces are conspiring to prevent humankind from reaching its true potential. As the newly-appointed 'Protector of the Realm,' Agent Matthew Dee uses his skills as a covert spy and Combat Mage to ensure America's freedom from the grip of evil. Who is Waylan Gheely, and what forbidden power has he stolen? What ancient evil, banished two millennia ago by Merlin himself, threatens to consume our
Broken World
What's to Love: We're thrilled to publish the one new original series co-created and written by Frank J. Barbiere (Five Ghosts, Avengers World) in 2015. Broken World is a gripping sci-fi thriller and survival adventure great for fans of Y: The Last Man or The Massive. Barbiere and co-creator/artist Christopher Peterson (Grindhouse, Mayday) will explore the lives of people left behind in the apocal 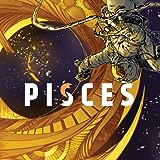 Pisces
Former fighter pilot Dillon Carpenter found everything he wanted when he returned from the Vietnam War.A loving partner, a dream career training with NASA to travel through space, and soon, he will learn, a prime candidacy for a secret mission, one that will forever change the world: First Contact. But as Dillon prepares, his war trauma returns and he's haunted by dark visions of his future. There