48 PAGES PRESTIGE FORMAT Dante was a family man with a wife and young daughter, and also a top assassin working for an international crime syndicate. For two decades he worked hard to keep these two lives separate and was then ready to retire. Manipulated into thinking he could quit with the syndicate's blessing, Dante was betrayed and accidentally killed a young Asian boy while fi ghting to save himself. This act changes him forever as he is supernaturally cursed and wakes up inexplicably covered with tattoos. Dante tries to uncover the source of this supernatural curse while looking for his family that has now disappeared. 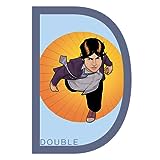 Double D
After the official Worst Day Ever, overweight bully magnet Danny Carter discovers he can use his excess body mass to fuel superpowers. Obviously he's going to be a superhero and fight crime, but when you're fifteen years old and you live in the suburbs it's not quite as easy as expected... Written by EDDIE ARGOS, singer and lyricist of critically-acclaimed classic rock band Art Brut, with art by S
Awakenings
In the year 2062, New York City detective Spencer Straight is hot on the trail of a gruesome serial killer with a peculiar trademark only to find himself on the run when every lead points to the one person he never would have suspected - himself. 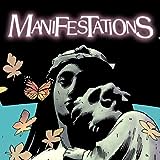 Manifestations
This comic is a DIGITAL ONLY, COMIXOLOGY EXCLUSIVE! This story centers on a woman tormented by the ghost of her sadistic husband only to discover that he has been brought back to life by her psychically gifted daughter, a 10-year-old who can move spirits from dark places to the land of the living.
The Devilers
When the world is under siege from the pits of hell, it's up to the DEVILERS to set things right. Seven of the world's greatest exorcists pit themselves against Satan's army, and all of creation hangs in the balance. From the writer of THE BUNKER, THE ULTIMATES, and I, VAMPIRE comes a horror fueled adventure through hell itself.