Mark Waid’s critically acclaimed saga continues! As a life-or-death drama plays out in Matt Murdock’s personal life, he faces the hidden foe behind his recent troubles: an unstoppable enemy with a connection to Daredevil’s origin! How will the demons of Matt’s past lead to Daredevil-sized problems in the present, both on the streets and in the courtroom? The Silver Surfer and Hank Pym guest-star as Daredevil faces the Jester, meets his new law partner and finds himself trapped in a monstrous nightmare! And when Daredevil targets the Sons of the Serpent, the secret clan who rules the city’s justice system, he soon learns just how blind justice can be! Elektra returns as Matt Murdock’s life begins spiraling out of control! Something final is building in Daredevil’s life — and building fast!
See More See Less

Daredevil (1998-2011)
It's the end of an era. The end of the Eisner-Award winning Bendis/Maleev run is here, and you'll have to see it to believe it! The team that outed Matt Murdock will leave you awestruck with a major change in the life of the Man Without Fear. A major, major change. 'Nuff said! Guest-starring everyone!
Daredevil (2015-2018)
Back in black and on his home turf, Daredevil begins again in New York City as a new enemy emerges. Meanwhile his alter ego, Matt Murdock, is on a new side of the law in the District Attorney’s office. Fighting crime in the shadows, prosecuting bad guys in the light, it’s a whole new chapter for our man without fear.
Immortal Iron Fist (2006-2009)
Two words, punks...BATTLE ROYALE! All the losers in the tournament in the Heart of Heaven get a chance to redeem themselves and obtain the ultimate victory...Danny Rand included! But if Danny couldn't win mano a mano, what hope does he have in a no-holds-barred kung-fu free-for-all of violence and carnage? And meanwhile, on Earth, the sinister Xao launches an attack almost a century in the making, 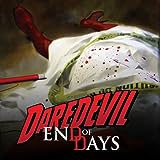 Daredevil: End of Days
Revealed at last... how it ends for the Man without Fear! In the near future, investigative reporter Ben Urich has one last story to write -- what was Matt Murdock's final secret?