We poisoned our planet. Sucked it dry of natural resources. Killed one another in the name of gods that never existed, and survived despite it all. Now, at the very edges of the fabric of space-time, the universe itself is starting to decay. Three warring races-the Human Empire, the organic Duron, and the cybernetic Luminids-must band together to stop their mutual destruction, and the future of the galaxy rests on Captain Rhodes and the crew of the H.E. Woden. 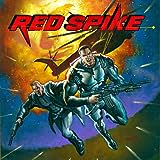 Red Spike
It's been over 70 years since the world first began its research into creating a Super Soldier. In 2011, the United States successfully created not one, but two. The latest in US Black Ops, Project Red Spike discovered that through the manipulation and regulation of the adrenal glands the super soldier was one step closer. The first (surviving) successes of the program, two close friends Matt Cutl
Genetiks
What happens to Thomas Hale when the company he works for cracks his genetic code? Genetiks is a pharmaceutical company on the cutting edge of biological science. Thomas Hale is one of thousands of employees in the Genetiks' labs. Like his colleagues, he had agreed to give a drop of blood to his employers; a drop of blood that will allow the researchers at the company he works for to decode his en
Insurrection V3.6
The premiere issue of an unforgettable new sci-fi epic that asks the question: what makes us human? Enter the future where pollution, poverty, and armed conflict have been obliterated. Only off-world on the terraformed moons of distant planets does war still exist. Corporations command more power than governments and when they go to war, they use their own military force - armies composed of bio-e
Cold Space
From legendary actor Samuel L. Jackson and Emmy nominated writer/producer Eric Calderon, the team that brought you the Emmy-award-winning, best-selling Afro Samurai, comes their next original series - Cold Space! When an on-the-run outlaw crash-lands on a hostile planet on the brink of civil war, he finds himself caught in the crossfire between two warring factions. But in chaos lies opportunity..