The battle royale continues as the world's greatest superheroes are forced to fight each other to the death in a mysterious, otherworldly prison. Who will be crowned the victor in this month's grudge match? More importantly, who will be the loser? And will the cabal of Sable, Meridian, Sol Invictus, and the Manchurian be able to decipher the mysteries of the prison before one of them is selected to enter the arena?

Deathmatch
THE SUPERHERO BATTLE ROYALE YOU CAN'T GET FROM MARVEL OR DC! A powerful and mysterious supervillain has imprisoned the world's greatest superheroes, forcing them to fight to the death until there is but one victor. It's kill or be killed as we settle the score on all those hypothetical superhero match-ups in the ultimate DEATHMATCH. Written by industry legend Paul Jenkins (SENTRY, INHUMANS) and 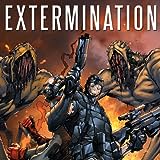 Extermination
We Lost. They Won. In the wake of an apocalyptic alien invasion, the world's greatest super-heroes and deadliest super-villains must form an alliance to prevent their own extermination. Two arch-enemies, Nox, a driven hero, and Red Reaper, a ruthless villain, form a volatile partnership for the greater good. The enemy of your enemy is your friend - but will they be able to ultimately put aside the
The Hypernaturals
A UNIVERSE TREMBLES. It is the far future; the human race has finally colonized the galaxy, preserving an era of prosperity that's only possible because of The Hypernaturals. They're a celebrated, galaxy-wide superhero task force that keeps the peace. That is, until they all mysteriously vanish. Now, as the galaxy teeters on the brink of chaos, it's up to a group of retired and long forgotten Hype
Black Market
Ray Willis is a broken man, a disgraced medical examiner making ends meet by preparing corpses at a funeral parlor. His scientific genius is being wasted...that is, until his estranged criminal brother Denny shows up on his doorstep, supposedly cleaned-up and proposing a once-in-a-lifetime partnership to cure not just cancer, but all disease. The catch? It exists within the DNA of superheroes.
Suicide Risk
Heroes are dying, and cops are dying twofold. Humanity is underpowered in the face of their onslaught, and people are suffering untold casualties trying to stem the flow. After barely surviving a super-powered bank heist gone horribly wrong, beat cop Leo Winters vowed to try and find a way to stop them. Following a lead, he discovered two lowlifes who seemed to be able to grant a person powers...f