Dejah Thoris and the Green Men of Mars Vol. 2

Collects Dejah Thoris and the Green Men of Mars #5-8!

Dejah Thoris has survived a horrific ordeal at the hands of the ravenous Thark, Voro. Now in hiding and mutilated, Voro is behind a terror campaign that threatens to destroy the peace that John Carter brought to red and green inhabitants of Barsoom. The violent Green Martian dreams of the streets of Helium flowing with the blood of its people. Traumatized, isolated, and fighting eons of race hatred, Dejah Thoris must stop the villain's red flood!
See More See Less

Dejah Thoris and the Green Men of Mars
The princess of Helium is kidnapped and taken to the underground cave hideaway of the brutal rogue Thark, Voro, who threatens to destroy the recent peace between the red-skinned Heliumites and the green-skinned Tharks. But Voro doesn't want a ransom. He's a butcher. For Tharks who never lost their taste for red meat, common Helium women are always in demand, but the incomparable Dejah Thoris will 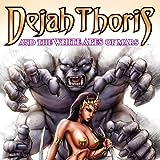 Dejah Thoris and the White Apes of Mars
On the way to an archeological dig at an ancient battle site at the 'face' of Mars, Dejah Thoris and her party are stranded. They take shelter in a dead, ancient city - infested with killer white apes. Hungry ones. The most harrowing horror story in the annals of Barsoom!
Warlord of Mars: Dejah Thoris
Martians live forever - everyone knows that. So what was Dejah Thoris doing all those hundreds of years before John Carter arrived? Four hundred years before the events of Warlord of Mars took place, Dejah's nation of Helium was divided into two warring city-states. An unscrupulous overlord from afar encouraged that rivalry to his own advantage, until he discovered a terrible secret from Mars' anc
Blood Queen vs. Dracula
The Prince of Darkness clashes with Elizabeth Bathory in this explosive new mini-series! Dracula returns from war to face a potential threat in the form of the Blood Queen. Whether they become allies or adversaries, there will be blood!
Patricia Briggs' Alpha & Omega: Cry Wolf
Anna never suspected that werewolves exist, till the night she became one herself! A rare Omega wolf, for three long years she's kept her head down at the bottom of the pack, learning to trust no one. Now, Anna's caught the eye of a powerful Alpha wolf, who recognizes her true value as a member of the pack. What will happen when Alpha and Omega come together? Cry Wolf is the latest series of super