Victor Von Doom is at a crossroads. Wrestling with visions of an entirely different life — a better future — the lord of Latveria offers mankind a stark warning about the folly of a trillion-dollar global effort to create the first artificial black hole. But when a catastrophic act of terrorism kills thousands, the prime suspect is…Doom! Left with no homeland, no armies, no allies — indeed, nothing at all — will Doctor Doom's reign come to an abrupt end? Forced to seek out an old "frenemy" for help, Victor will go through hell — literally! And his old foe Mephisto is waiting for him there! Doom will have to battle Taskmaster, M.O.D.O.K., the Blue Marvel and more — but can he clear his accursed name?

Maestro (2020)
Collects Maestro (2020) #1-5. The story you’ve waited decades for: the origin of the Maestro! Almost 30 years after the landmark tale FUTURE IMPERFECT, legendary INCREDIBLE HULK scribe Peter David returns to the far-future version of the Hulk — the embittered, tyrannical master of what remains of the world! With astounding art from HULK veteran Dale Keown and up-and-coming talent Germán Pe 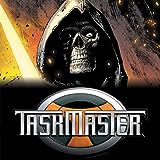 Taskmaster (2020-)
Collects Taskmaster (2020) #1-5. Taskmaster has murdered S.H.I.E.L.D.'s Maria Hill! Or at least that's what the whole world thinks. Now the greatest spies in the business are hunting him down and won't stop until the Taskmaster is dead — or can clear his own name! So begins a globe-spanning adventure that will send ripples through the Marvel Universe's espionage community. Taskmaster's next t
Ghost Rider (2019-)
Collects Ghost Rider (2019) #1-4, Absolute Carnage: Symbiote Of Vengeance And Material From Marvel Comics Presents (2019) #6 and Incoming #1. All hell breaks loose as the Brothers Ghost Rider return! Johnny Blaze is the king of Hell, its first line of defense against demonic hordes trying to escape and lords of other infernal regions making a play for his throne - including a certain evil queen
Juggernaut (2020-2021)
Collects Juggernaut (2020) #1-5. Can’t stop, won’t stop! A mystic gem. An avatar of destruction. A force of overwhelming power. An embittered man with a life of regret. Nothing can stop the Juggernaut — except himself! Buildings fall, chaos reigns and the Juggernaut does what the mystical Cyttorak empowered him to do — but Cain Marko, the man beneath the helmet, is done letting others p