Collects the entire six-issue DRAGON AGE miniseries!
In a time lost to history, a war ravaged the land. Mages, incredibly powerful wielders of magic, ruled the world through mastery of dark arts and forbidden spells. Their lust for power almost destroyed all existence, and unleashed an unholy pestilence, the Darkspawn, to plague mankind, trolls, faeries, and all the inhabitants of the realm. Now magic is carefully controlled, taught behind the sacred walls of the Circle of Magi, and monitored by the ever-vigilant Templars. It is in this arena that a new generation of Mages in training will arise, warriors of sorcery who will defy the rules of the Templars and change the course of the world forever.
See More See Less

Dragon Age
Hailed as "the RPG of the Decade" by PC Gamer magazine, Dragon Age: Origins has redefined the modern fantasy roleplaying game. Now, the innovative game from BioWare becomes the latest hit comic from EA Comics! In a time lost to history, a war ravaged the land. Mages, incredibly powerful wielders of magic, ruled the world through mastery of dark arts and forbidden spells. Their lust for power almos

Dragon Age
Dragon Age: The Silent Grove is the perfect introduction to BioWare's dark fantasy universe! In this essential, canonical story from David Gaider, lead writer of the games, King Alistair, accompanied only by rogues Isabela and Varric, embarks on a quest deep inside the borders of Antiva,a nation of assassins! Together, they will encounter a prison break, dragons, the mysterious Witch of the Wilds,
Mass Effect: Discovery
Mass Effect: Andromeda, one of the year's most hotly anticipated video games, will be released in Spring 2017. Dark Horse is pleased to be releasing Mass Effect: Discovery, the canonical comic continuation! A young Turian military recruit goes undercover in order to infiltrate the mysterious Andromeda Initiative--and ultimately retrieve a scientist who's made a potentially devastating discovery
Mass Effect: Foundation
Introducing Rasa, a mysterious agent working behind the scenes for the Illusive Man and his human-survivalist paramilitary group, Cerberus! First, learn how she began her life as a covert operative,then, follow her investigations and witness formative events in the lives of signature characters Urdnot Wrex, Ashley Williams, and Kaidan Alenko! 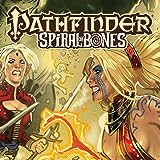 Pathfinder: Spiral of Bones
As the Pathfinder plunge into the history and mysteries below Kaer Maga—the no-holds-barred 'City of Strangers'—Valeros plunges far deeper into the great beyond, defending his immortal soul in the courts of the dead! From Pathfinder author Crystal Frasier comes this scintillating tale of life, death, and what lingers when we're gone. Bonus: Starfinder backup story! Thousands of years in Pat