A weird infestation is spreading around Rush, killing victims suddenly and painfully. Desperate to stop it before it becomes a plague, Killian and Cheela work together to find the cause and the cure. It seems to be spreading, rapidly and without reason, but how?

40 Seconds (comiXology Originals)
40 SECONDS is a science fiction/fantasy story about a forward team of science explorers, traveling through a series of alien gateways, in order to answer a distress call a galaxy away. They find themselves jumping across the universe though strange and beautiful landscapes only to be hunted by a vast inexplicably unstoppable horde. Truths lie at the final gate. If only they can make it in time.
Origins
A thousand years after humans are killed off by artificial intelligence, one man is brought back to life -- David Adams, who created the technology that destroyed his people. Now with the help of the android Chloe who revived him, David will try to restore humanity -- and stop the AI overlords he created. David embarks on the greatest battle of his life, seeking redemption while also discovering i 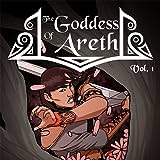 The Goddess of Areth
Nature is dying in a world called Areth, and Dana takes it upon herself to save it. However, Dana quickly realizes that saving Areth takes more than only preventing nature from dying out.
Hailstone (comiXology Originals)
In the isolated Montana town of Hailstone, cut off from the outside world by a brutal winter, food is running low and people are going missing. Desperate townsfolk turn to Sheriff Denton Ross, and the nearby Military factory, for help. But why is the factory here, so far from the war? And how is it able to supply the Union forces, with the town cut off by snow? In their search for answers, Sheriff