Abraxas attacks! His first volley has left Galactus dead, the Watcher in a coma and all of reality rewritten! Can the Fantastic Four and their allies stop this all-powerful madman before it's too late? Guest-starring the Silver Surfer! Moondragon! Quasar! Captain Marvel! Namorita! She-Hulk! Witness the most narrow of victories as the weakest among them saves the world, trading the defeat of one galactic threat for the rebirth of another! And is the Invisible Woman pregnant?
See More See Less 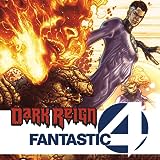