As the Fear Itself hammer-wielders continue their campaign of terror, Red Hulk takes on the newly deified Ben Grimm, the FF's Thing! It's bruiser vs. bruiser as two of the world's strongest battle it out in an all-out brawl that will shake the world! Plus: Omegex, a deadly force from beyond the far reaches of space, has awakened - and he wants Red Hulk! What can Red do against a destroyer of entire worlds? Then, as the Worthy-enhanced Hulk rampages across the countryside, only one group stands against him: the Vampire Nation!
See More See Less

Hulk (2008-2013)
Superstars JEPH LOEB and ED MCGUINNESS will change the way you see THE HULK! In this startling origin epic, the breathtaking events that ended World War Hulk rocket into this brand-new Hulk title. When one of The Hulk's oldest cast members is murdered, everyone turns to the team of IRON MAN, SHE-HULK and LEONARD SAMSON to solve the grizzly case. All the evidence points to the Hulk as the killer - 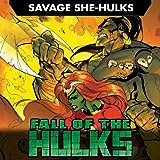 Fall of the Hulks: The Savage She-Hulks (2010)
She's left her apocalyptic world for this one. Her mother was a heroine, her father a rampaging Hulk. What path is the Savage She-Hulk called Lyra on, and why has it led her to add her might to the Wizard's Frightful Four? See how some of the toughest women in the Marvel Universe tip the balance of power in the Fall of the Hulks with this exciting miniseries by Jeff Parker and Salva Espin! 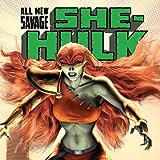 All-New Savage She-Hulk (2009)
From a world where society as we know it has crumbled and humanity has been irrevocably changed, she comes -- the all-new, all-different SAVAGE SHE-HULK! But now, a deadly mission has brought her to our world. What terrible secret does this gamma-irradiated beauty bare? And is she friend or foe, Inhuman or mutant, Avenger, Defender...or Invader?