The Thunderbolts stare into the face of fear! A mystical hammer falls from the sky and lands on the Raft, possessing the mind and body of the unstoppable Juggernaut - who becomes a servant to the Asgardian god of fear! With the prison compromised, the remaining Thunderbolts must quell an insurrection by hundreds of freed super-criminals and the dissent spreading among their ranks, as some of the team members see the chaos of Fear Itself as an ideal moment to make their escape. And, after using the weapon of the gods to cut a swath through the supermax prison facility, Juggernaut heads toward his next target: Chicago!
See More See Less

Thunderbolts (2006-2012)
Former villains turned heroes, the Thunderbolts are a team looking to right the wrongs of the world while finding redemption for themselves.

Heroes For Hire (2006-2007)
CIVIL WAR tie-in! In response to the overwhelming number of masked fugitives on the loose, Misty Knight and Colleen Wing use their bail bonds skills, underworld connections and government funding to lead an all-new Heroes for Hire into battle.

Civil War: Front Line
World War I, World War II, the Vietnam War. These are the battles that defined a nation. Civil War. This is the battle that defined a Universe. Witness the hectic skirmishes of all these conflicts side by side, the Marvel way!
Civil War: X-Men
As the Marvel Universe is ripped apart by the Civil War, the X-Men also find themselves crumbling from the inside out. Will they fold-up and admit defeat, or will the X-Men finally start to fight back? 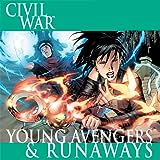 Civil War: Young Avengers & Runaways
As the public turns against Marvel's heroes, the gears of Civil War threaten to crush the Runaways. But when the Young Avengers offer their assistance, how can the Runaways be sure they're on the same side?