Existential clown comedy as you like it.
SEE! Fred the Clown get slapped regularly in his single-minded pursuit of l'amour!
HEAR! The screams of his lady friends from several blocks away!
SMELL! Fred the Clown's scientifically improbable collection of fungal infections!
The signature creation of cartoonist Roger Langridge, Fred the Clown is the thinking man's idiot. Fred has an eye for the ladies, as well as several other organs, but the only part of themselves they're willing to share with him is a carefully placed kneecap...
Fred the Clown's misadventures are a curious balance of bleakness and joyful absurdism; the universe may dump on Fred from a great height, but he never gives up. More often than not, they involve the pursuit of a lady—any lady will do, it seems, but bearded ladies are at the top of the list. Disappointment seems inevitable, and it usually is; yet, almost despite himself, Langridge will occasionally give Fred a happy ending out of nowhere...

Langridge's comics betray a restless stylistic playfulness, a pessimism about human nature, and an absurdist perspective on human folly that can be traced back through Monty Python, The Goon Show and even as far back as Lewis Carroll. Fred the Clown's visual look often harks back to earlier eras, evoking the styles of (among others) Max Fleischer cartoons, classic newspaper strips, 19th-century illustration, the children's books of Maurice Sendak and Doctor Seuss, and more. The sensibility, though, is thoroughly modern—no classic style goes unsubverted, no narrative is left without ending in emotional ambiguity or a pomposity-puncturing ironic gag. Underlying it all is Langridge's own meticulous brush style. According to another New Zealand cartoonist, Hicksville creator Dylan Horrocks, "If Samuel Beckett had teamed up with the Goons and learned to draw like Tex Avery, the result would have been something very like the comics of Roger Langridge."
See More See Less 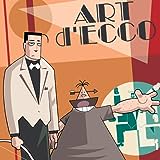 Art d'Ecco
In the late 1980s, long before his work on the Eisner and Harvey-nominated Fred the Clown, Roger Langridge worked with his brother Andrew on a comic called Art d'Ecco. In these early stories, done mainly (but seldom entirely) for laughs, one can see the beginnings of the formal playfulness that would characterize the later work of both Langridge brothers, and of the elaborate layering of subtle an
Gahan Wilson's Out There
Gahan Wilson is probably best known for his macabre Playboy cartoons―filled with charming monsters, goofy mad scientists, and melting victims―and his cutting-edge work in the National Lampoon, but in 1964, he brought his brilliantly controlled wiggly-but-sophisticated pen line to The Magazine of Fantasy & Science Fiction. Wilson's freaks and geeks found a home among the stories of the best fan
VIP: The Mad World of Virgil Partch
Only a few months after the devastating attack on Pearl Harbor and the same year that Albert Camus offered the world his bleak vision of man’s existence by introducing his philosophical dictum of The Absurd, Virgil Partch burst onto the scene with his own twist on the phrase. Partch was a cartoonist who offered comic counterpoint to the grim headlines and a unique perspective on human nature in 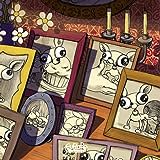 Memories of a Crappy Pooch
Maria Fuencisla, a long-term resident in a central Madrid neighborhood, is hit hard when her pet dies in a tragic accident. Her three best friends, Anastasia, Dori and Ricarda, come up with various schemes to try to comfort her, but it's almost impossible, because the deceased dog was the focus of the old lady's entire universe. These pages are full of tragicomic memories showing us how Maria Fuen