What happens to Thomas Hale when the company he works for cracks his genetic code? Genetiks is a pharmaceutical company on the cutting edge of biological science. Thomas Hale is one of thousands of employees in the Genetiks' labs. Like his colleagues, he had agreed to give a drop of blood to his employers; a drop of blood that will allow the researchers at the company he works for to decode his entire genome. As the drop of blood is the property of Genetiks, Thomas will become, in effect, the first man to be privately owned by the corporation he works for.

Hacktivist
From the creative mind of Alyssa Milano, with artist Marcus To and writers Jackson Lanzing and Collin Kelly, Hacktivist is a fast-paced cyber-thriller about friendship and freedom in a time of war. The world knows Ed Hiccox and Nate Graft as the young, brilliant co-founders of YourLife, a social networking company that has changed the way the world connects with each other.
Mandalay
A sweeping saga of two brothers locked in combat in colonial 1940s Burma, where an ancient magic will decide their fate, and that of the whole country. When a buried city is discovered deep in the Burmese jungle by a cruel 16th century monarch, he unleashes an evil counterpart, thanks to three mysterious mirrors. Five centuries later, during World War Two, the country is under British colonial rul 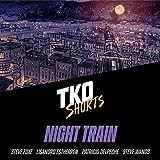 Night Train
TKO Studios presents "Night Train" by Steve Foxe, Lisandro Estherren When Neal's new baby brother begins to drive him insane with sleepless nights, Neal starts seeing a spectral train with a ghostly conductor offering to solve his problems by taking his baby brother far away. From Steve Foxe (Razorblades: The Horror Magazine) and Lisandro Estherren (Redneck, The Last Contract). Check out T
Hexed (2008-2009)
Explosive first issue! It's said there's no honor amongst thieves. Add to that a thief operating in the occult underground, and it's whole different kind of nasty! Luci Jenifer Inacio Das Neves, Lucifer for short, takes a new job that will expose her to the macabre underbelly of the city, and a secret that she'd rather nobody know. A brand new series by Michael Alan Nelson, the critically acclaime