Los Angeles, 2024: Private Eye Billy Blackburn is back, and doing kinda okay for a change. He's closing cases, his knockout assistant might be hot for him, and debtors have stopped calling. Same can't be said for his partner, Knuckles, though; he's being haunted by gruesome visions of WWIII, and they're overtaking his sanity. So when a little old lady hires Blackburn to find out how her dead rock star son -Dirt/Nap front man Zeppelin Monroe- is still rocking stadiums, the past and present are set on a collision course that'll test old loyalties, uncover buried truths, and bring long-simmering bad blood to boil.

Collecting all four issues of Blackburn's second mystery, featuring an all-original 12-song soundtrack tied directly to the story, and packed with extras, Dead Zep is the first and only graphic novel that goes to ELEVEN. 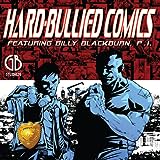 Hard-Bullied Comics
Los Angeles, 2024: The Sci-Fi Noir saga of Private Eye Billy Blackburn! Ferocious fisticuffs, scathing satire, phonies and fame-seekers, femme fatales, and murky mysteries, all wrapped in a conspiracy dating back to Blackburn's Spec Ops days in WWIII! Might seem like a lot, but to Blackburn and his partner, Knuckles? It's just another day in sunny CA.