THE NEW SERIES FROM SIXTH GUN WRITER CULLEN BUNN AND
FAN FAVORITE ARTIST JOËLLE JONES CONTINUES! His sense of
purpose renewed, Rikard takes the fight to both Groa and Bera... but he
will not face the fury of the witches alone. Raising an army of fierce
warriors, Rikard marches against a demonic horde. But can even the
mightiest of human warrior stand against such ungodly might? Find out in
a mass battle unlike anything that has been depicted in comics before!
See More See Less

Helheim
A NEW SERIES FROM SIXTH GUN WRITER CULLEN BUNN AND FAN FAVORITE ARTIST JOELLE JONES! "Once the threshold of Helheim is crossed, not even gods can escape." During the age of the Vikings, savage wild men and dark creatures beset a small settlement. A brave war party stands as guardians of the helpless villagers, but they are no match for the horrors rising up around them. One of the warriors, a youn

Hellbreak
There are thousands of Hells, each unique, each terrible. Mega-cities ruled by vicious gangs. Empires where the most perverse are well-respected. Wastelands roamed by prehistoric monstrosities. With the proper tools and know-how... you can infiltrate Hell whether you're dead or not. With the proper tools and know-how, you can break out. Project Kerberos has developed this forbidden technology, and
Valen the Outcast
The King is dead - long live the Dead King! King Valen Brand was a just king and a great warrior until he was killed by a Necromancer in battle and resurrected as one of the walking dead. Now he's considered an abomination in his own realm, an outcast with only one purpose: to restore his lost soul! From the mind of fan-favorite creator Michael Alan Nelson (28 Days Later, Robert E. Howard's Hawks
Rot & Ruin
Brand new adventures set in the world of Rot & Ruin! Written by NY Times best-selling author and multiple Bram Stoker award-winner, Jonathan Maberry, this all-new storyline continues events from the award-winning series of novels. In Rot & Ruin: Warrior Smart we meet Benny, Nix, Lilah and Chong as they travel through the Sierra Nevada mountains just one faltering step ahead of zombie hordes and on 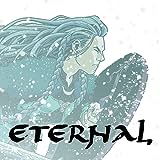 ETERNAL
A group of isolated shieldmaidens protect their village against a tide of men who think they can seize land from them. Vif takes her band of women off viking to quell the advances of a loitering mystical scumbag, Bjarte. But some battles rage on inside us long after the field is empty, and some opponents won't ever stay down. Eternal is a haunting story of how vulnerable you make yourself when try