Hit Reblog showcases the viral sensations of the webcomics world and the true stories behind their creators. Follow the ups and downs of internet fame, from IP theft to book deals, and all the trials of becoming an overnight sensation after gaining 10,000 reblogs in a single night. Learn about the origins behind the hit comic strips "This is Fine", "All Houses Matter", "No Take, Only Throw", and frequently-viral webcomics such as Owlturd, Cyanide and Happiness, False Knees, and Poorly Drawn Lines. Each of the twenty artists featured includes a biographical intro by award-winning comic artist Megan Kearney (Disney Princess, The Secret Loves of Geek Girls).

Superfreaks (comiXology Originals)
Get ready to binge read an all-new 5-issue superhero mystery debuting in its entirety with art by rising star Margaux Saltel, making her series debut, and written by Elsa Charretier and Pierrick Colinet (IDW's Infinite Loop). All the world's superheroes have disappeared overnight, and it's up to their untrained, largely overlooked teenage sidekicks to find out what happened--while dealing with
Savage Game (comiXology Originals)
From NFL player Ryan Kalil's company Strange Turn comes an original 60-page sci-fi graphic novel that is a high tech version of The Island of Dr. Moreau. What happens when a rogue titan of Silicon Valley creates his own island nation with no laws to hold him back? You get the Savage Game. Welcome to Liber Haven, where audiences watch genetically modified hybrid creatures fight to the death in 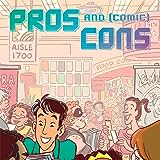 Pros and (Comic) Cons
Following the bestselling The Secret Loves of Geeks comes this brand-new anthology featuring comics and prose stories by cartoonists and professional geeks about the world of comic book conventions from the guests whove attended them across the world. Featuring stories that are funny, sad, sweet, embarrassing, and heartfelt of a geek-culture life that shapes us, encourages us, and exhausts us ever
Goliath Girls (comiXology Originals)
Monsters will rise, cities will fall...but best friends are forever! Zelda, Eunice, and Juliet are three best friends: orphans of the Kaiju Generation, and adoptive mothers to their own baby Goliath! For years they've searched for the elusive King of All Goliaths, the one fabled to bring the Forever War to an end. But they're not the only ones on his trail. From Sam Humphries (Harley Quinn, Gr