In the frozen halls of Lu'Ghul Castle lingers Vanion Knightwood, an ancient elvish Necromancer, preparing to unleash a deadly plague upon the human town of Korsova.

But an ancient foe is coming to stop him; Lady Ireena, the old and weary Knight-Commander of the elvish Sun Goddess, has stowed away aboard a merchant ship to avoid the Necromancer's spies.

As Ireena is forced to reconcile her own twisted history with Vanion, perceptions of right and wrong are skewered in the second chapter of this often surprising dark fantasy adventure.
See More See Less 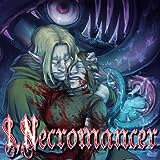 I, Necromancer
I, NECROMANCER is the story of a dangerous elvish Necromancer named Vanion Knightwood. As he prepares to unleash his unholy revenge on Mankind, he reflects on his tragic life, his own ambitions, and being a father. The series is a sprawling gothic horror/fantasy tale that features a diverse cast of dark, complex, sometimes even funny characters, taking place in a world that lives somewhere between