A haunted house story for the 21st century, INFIDEL follows an American
Muslim woman and her multi-racial neighbors who move into a building
haunted by entities that feed off xenophobia. 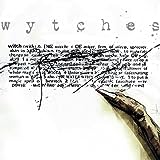 Wytches
Across the globe, century after century, men and women were burned, drowned, hanged, tortured, imprisoned, persecuted, and murdered for witchcraft. None of them were witches. They died protecting a terrible and hidden truth: witches, real witches, are out there. They are ancient, elusive, and deadly creatures that are rarely seen and even more rarely survived.
Redlands
A brand-new horror book from the minds of Eisner Award-winner JORDIE BELLAIRE (PRETTY DEADLY, Vision, Batman) and critically acclaimed artist VANESA R. DEL REY (ZERO, Scarlet Witch, Constantine) brings you to the sleepy, sunny town of Redlands, Florida. The police are failing to maintain control of their old-fashioned town, and a coven of killer witches plan to take everything from them. This summ
Colder
Declan Thomas is an ex-inmate of an insane asylum that was destroyed in a fire, he has the strange ability to step inside a person's madness,and sometimes cure it. He hopes to one day cure his own, but time is running out, as a demonic predator pursues him. Collects the five-issue miniseries. * From the Eisner nominated writer of Bandette. "Ferreyra has superstar written all over him and t