Thanos makes his world-shattering return, and his armies fire the opening shots of a galactic war that will be fought both on Earth and in deep space - with our heroes caught between both battles! As the mad Titan's secrets are revealed, the Inhumans' city of Attilan falls, and the members of the Illuminati find themselves on the front line! And as every Origin Site on Earth goes active, the Builders enter the Marvel Universe. But can the Avengers return to Earth in time to save it, when betrayal in the Galactic Council has left them prisoners of war?
See More See Less 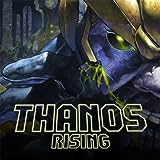 Thanos Rising
Thanos rises as the unrivaled rogue of wretchedness in this gripping tale of tragedy, deceit and destiny. Where did this demi-god of death and destruction come from and...more importantly what does he want?
New Avengers (2013-2015)
To prevent a collision of universes, the Illuminati must assemble NOW! Led by the Black Panther, the most powerful and brilliant team in the Marvel Universe is up against an infinite legion of parallel realities!
Secret Wars (2015-2016)
The final incursion is happening! The Marvel Universe is colliding with the Ultimate Universe, and neither will survive! When Everything Ends, what will become of the Marvel Universe?
Avengers (2012-2015)
Marvel Now! adds new faces to Earth's mightiest team of superheroes! The Avengers expand their roster and sphere of influence to a global -- and even interplanetary -- level!