After the fall of Attilan and the Terrigen Bomb explosion, thousands of people across the globe have transformed into Inhumans! Their new powers are dangerous and terrifying, making them targets. With Black Bolt believed dead, who can these new Inhumans turn to? As the Avengers face Karnak, who has discovered the Inhumans' secret, Medusa struggles to rule her vastly increased population, and Marvel's heroes - including the Hulk, Spider-Girl, the X-Men, the new Illuminati, Iron Man, the Jean Grey School, Avengers Academy, Luke Cage and the Superior Spider-Man - must cope with the fallout!
See More See Less

Inhuman
The newest super heroes of the Marvel Universe are born! A cloud of Terrigen mist is moving around the world turning regular people into Inhumans with amazing powers. Discover the secret history of the Marvel Universe and get in at the ground floor of the next big Marvel franchise!
All-New Inhumans (2015-2016)
As the Terrigen Clouds move around the world they leave in their wake the wrecked lives of the Inhumanized. Crystal and her team are tasked to help as many of these NuHumans as possible, but it's not going to be easy. Not only are views of these new super-powered people varied (from fear to anger to amazement) but even those who get the powers aren't always glad to get them.
Uncanny Inhumans (2015-2017)
The prelude to one of Marvel’s biggest launches of 2015 is here! Think you know Black Bolt? Think again, as creators Charles Soule and Steve McNiven show you a side of the Inhuman King you’ve never seen before! 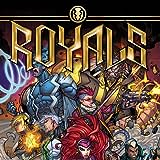