Injustice: Gods Among Us Year Four - The Complete Collection

Injustice: Gods Among Us Year Four - The Complete Collection
4.5
(146 ratings)

The endlessly surprising saga of superhero dystopia inspired by the hit video game continues! This action-packed graphic novel collects the entirety of the fourth year of the now-legendary Injustice: Gods Among Us saga.

When Superman and the Justice League declared themselves the ultimate authority on planet Earth, only Batman stood against them--but now Batman is defeated. His resistance army has suffered major losses and dwindled to nearly nothing. The man who always has a backup plan for his backup plans has nothing--except for one final, desperate gambit.

Written by Tom Taylor and Brian Buccellato (Detective Comics, The Flash), this graphic novel collects the fourth year of the best-selling series in its entirety for the first time. Writer Brian Buccellato and artist Bruno Redondo continue to expand the world of the hit video game in Injustice: Gods Among Us: Year Four: The Complete Collection.

Injustice: Gods Among Us (2013-2016)
From the makers of Mortal Kombat comes the critically acclaimed prequel comic to the smash hit fighting game Injustice: Gods Among Us! Things in the DC Universe have changed after Superman is tricked into destroying the one thing he loves the most. Now unwilling to let crime go unpunished, the heroes of our world must choose if they are with Superman or against him. But not every country will s

Injustice 2 (2017-2018)
The all-new prequel to the highly anticipated Injustice 2 video game begins here! Original INJUSTICE writer Tom Taylor continues the story from the hit series INJUSTICE: GODS AMONG US. Superman is imprisoned, and it's up to Batman to put the world back together. But with Superman's iron-fisted regime eliminated, other forces rise up to fill the void. And Batman doesn't have a lot of allies left to 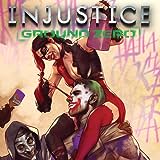 Injustice: Ground Zero (2016-)
This new series retells the story from the first INJUSTICE: GODS AMONG US video game from the twisted perspective of Harley Quinn.

Injustice Vs. Masters of the Universe (2018-2019)
Believing He-man and the Masters of the Universe defeated, a robotic impostor has seized control of Eternia-but not for long! After freeing his kingdom from this strongman's rule, Prince Adam learns not everyone is pleased to see the pretender deposed-but Adam knows the value of freedom. So when heroes from another dimension ask his aid in deposing a super-hero turned dictator, he agrees. Teaming

Justice League (2011-2016)
Comics superstars Geoff Johns (GREEN LANTERN) and Jim Lee (BATMAN: HUSH) unite for the first time to tell the bold beginning of the DC Universe's premier super team! The dawn of the age of heroes has begun! Learn how the Justice League formed and what launched them as the greatest team in the DCU!