Guy Colwell's Inner City Romance tread new territory for underground comix, filled with stories about prison, black culture, ghetto life, the sex trade, and radical activism. It portrayed the unpleasant realities of life in the inner city, where opportunities were limited and being on the lowest end of the economic ladder meant that one's vision of the American dream was more about survival than lifestyle choices. Readers wondered who Colwell was, whether he was black or white, and how he knew so much about prison. Two years at McNeil Island federal prison for draft refusal provided a personal education for him, as well as his involvement with the San Francisco Good Times underground newspaper, where he became a close observer of the White Panthers, the Symbionese Liberation Army, and anti-war demonstrations. Inner City Romance details Colwell's life on the mean streets. Every issue of Inner City Romance is included in this collection, as well as many of the highly detailed paintings he created at the same time. Colwell recounts in an accompanying text piece, his personal journey to artistic maturity forged by radicalism and frustration.

"This 1972 underground comic was one of the first to engage the racial divide boiling over during the peace and love era. Colwell's series is a brutal comedown. His characters, fucked up on drugs and gorging themselves on sex, debate the social issues of the day. Essential, incredible work." -Dan Nadel 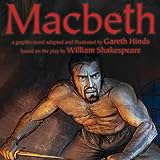 Macbeth
Something wicked this way comes . . . Dark ambitions, madness, and murder. Shakespeare's classic story of a man's reckless quest for power springs to life in Gareth Hinds's masterful new graphic novel. Macbeth, a general in the King's army, is returning from battle when he's stopped by the sudden appearance of three witches who tell him one day he'll be King. At first Macbeth dismisses their
witzend
When the formulaic constraints, censorious nature, and onerous lack of creator's rights in mainstream comics got to be too much for the brilliant cartoonist Wallace Wood, he struck out on his own with the self-published witzend. It became a haven for Wood and his fellow professional cartoonist friends where they could produce the kind of personal work that they wanted to do, without regard to comm
Comanche
A lone cowboy rides into town and all hell breaks loose... Sound familiar? Here is yet another take on the beloved Wild West trope, complete with corrupt law enforcement officers, a town drunk, guns for hire, a brave young woman trying to hold on to her failing ranch, vicious people with wealth and power trying to take it from her, a couple of cow-herders, and a colorful cast of characters with na
The Man Who Loved Breasts
By day, Robert Goodin works in the animation industry on shows like Rugrats, As Told by Ginger, The Wild Thornberrys and American Dad. And by night, he's a comics artist/illustrator whose work has appeared in McSweeney's Quarterly Concern, Mome, Project: Romantic and for the Los Angeles Metro Transit Association. Several years back,Top Shelf used to distribute a super-deluxe line of his mini-co