The heartbreaking end of an era — and the inspirational dawn of a new one! As the events of CIVIL WAR II come crashing down around Tony Stark, what exactly is Victor Von Doom up to amid the chaos? And when hostilities cease, could this be the end of Iron Man as we know him? A blistering new chapter in the Iron Man mythos will begin in the wake of the war's shocking climax when a young woman answers the call. Riri Williams will don the armor — but what is her surprising relationship to Tony Stark? The Marvel Universe will never be the same! Plus, a classic showdown for the ages between Iron Man's Mighty Avengers and the diabolical Doctor Doom!
See More See Less 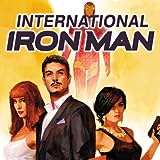 International Iron Man (2016)
Who is Tony Stark, really? Since learning that he was adopted as a baby, this question has cast a shadow over Stark's life. Now, it is time to uncover what his legacy truly is, a journey that will carry Tony into new directions as a man and as a super hero. Alongside his strange new quasi-ally Doctor Doom, Iron Man will discover new things about the Marvel Universe he didn't know existed before!
Invincible Iron Man (2016-2018)
From the violent streets of Chicago, a new armored hero rises! Clad in her very own Iron Man armor, Riri Williams is ready to show the Marvel Universe what she can do as the self-made hero of tomorrow. But is she ready for all the problems that come with stepping into Iron Man's jet boots? Where's a genius billionaire playboy philanthropist when you need one?
Invincible Iron Man (2008-2012)
IRON MAN! You know you love him! And as the summer's most anticipated movie boot-jets its way into theaters, here's the perfect jumping-on point for new readers and Iron Man fans alike! Tony Stark - Iron Man, billionaire industrialist and director of S.H.I.E.L.D. - faces the most overwhelming challenge of his life. Ezekiel Stane, the son of Tony's late business rival and archenemy Obadiah, has set
Iron Man (2012-2014)
Tony Stark -- Iron Man: visionary, playboy, engineer, Avenger. But when Extremis, his greatest invention, is let loose and up for grabs to the highest bidder, it's up to Iron Man to contain it. That means creating a new suit of armor...NOW!