Collects the first NINETEEN ISSUES of IRREDEEMABLE!
From Eisner Award winning writer Mark Waid comes an all-new original superhero series, IRREDEEMABLE, that dares to ask the question: what if the world's greatest hero decided to become the world's greatest villain? Collecting the first half of the multi-Eisner and Harvey Award nominated "twilight of the superheroes"-style epic that examines super-villains from the writer of KINGDOM COME and DAREDEVIL!
See More See Less

Incorruptible
Last April BOOM! Studios showed the world that 'Mark Waid Is Evil' with the smash-hit series Irredeemable. Now, Mark Waid is Incorruptible! Super villain Max Damage had an epiphany the day The Plutonian destroyed Sky City. When The Plutonian turned his back on humanity, Max Damage decided to step up. Now Max Damage has changed his name to Max Daring and turned from his formerly selfish ways to bec
Harbinger (2012- )
Read minds. Bend steel. Break all the rules. Teenager Pete Stanchek is out of work, on the skids, and-- unbeknownst to him-- a psionic-powered "harbinger" with the potential to reshape the course of human history. Toyo Harada is a wealthy business magnate, a respected philanthropist and the most powerful harbinger of all-- or so he thought. As they forge an uneasy alliance, will Harada offer Pete
Astro City (1996-2000)
Kurt Busiek's follow-up to the first ASTRO CITY limited series. Visit a city full of heroes, villains, mad scientists, monsters, innocent bystanders, and more! 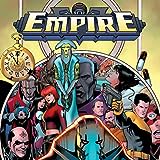 Empire
Golgoth thinks he controls most of the populated Earth, ruling through military might and fear, but he can't even trust his own super-powered staff.