"What's to Love: If you've read S.M. Vidaurri's first original graphic novel Iron: Or, the War After or his issue of Jim Henson's The Storyteller: Witches, you might understand when we say his watercolor stylings are hauntingly beautiful to look at'they have a soft gentleness to them, yet can convey the most stark of imagery. His new OGN has us completely mesmerized once again, invoking comparisons to The Legend of Korra and the works of Hayao Miyazaki.

What It Is: When Carson, a young girl living with cancer, is bestowed with age-old magic by a rebellious sorcerer named Iscariot, she must navigate her new powers, face the life she had thought she left behind forever, and take on the order of magicians who want to control her destiny. Carson discovers that Iscariot's intentions might not have been as altruistic as it first appeared, and learns the hard way that magic comes at a cost."

Iron: Or, the War After
It is the aftermath of a long war, in a world of constant winter. An intelligence spy from the Resistance - the rabbit, Hardin - steals secret information from a military base of the Regime. His actions set off a chain of events that reverberates through the ranks of both sides, touching everyone from Pavel the crow to Giles the goat, from the highest-ranking officials to the smallest orphaned chi
Feathers
WHY WE LOVE IT: In the footsteps of Archaia titles Rust, Iron, Will o' the Wisp, and The Reason for Dragons, debut writer-artist Jorge Corona brings a brand-new voice to the comics industry with Feathers. With our passion for working with fresh talent, we could not be happier to introduce his work to a wider audience. WHY YOU'LL LOVE IT: There's never been a better time for fantastic, all-ages 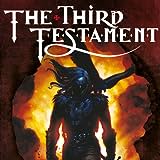 The Third Testament
The 14th Century. Shortly after the discovery of an ancient relic in a secret, long-forgotten crypt, a remote monastery is burnt to the ground, and all its inhabitants slaughtered. Disgraced Inquisitor Conrad of Marbug is summoned from his exile and sent on a world-spanning quest to discover the truth behind the massacre. But is he, the church, and humanity ready for the shattering revelations his
Spera
Lono’s life as a princess consisted of sitting, reading, and dreaming—until the day Pira, princess of a neighboring kingdom, arrived with news of a waking nightmare! With the help of Pira’s best friend—a fire spirit in the form of a dog named Yonder—the princesses now find themselves in a race against evil. The goal: Spera, a magical realm of which the princesses had only ever heard the