Isle Squared Comics presents ALL 5 Isle Squared series premiere issues written by Chuck Amadori.
I: Pale Dark: Issue 01
Subject K: Part 01 - A man, referred to only as Subject K, is interrogated and tortured by a strange pale man. Art by: Ruvel Abril. Sci-Fi/Drama.
II: Tether: Issue 01
Imperium: Part 01 - Alina is thrust into the Arena for the first time, catching the attention of the demented Doctor Murrell. Emperor Trovaar consults with the cerebrals. Doctor Murrell and Doctor Cybin undermine one another at every turn. Line by Alex Reis, colors Nimesh Morarji. Sci-Fi/Fantasy.
III. Empress: Issue 01
Starlet Lost: Part 01 - The supernatural/noir tale details the search for missing silent film queen Zia. As investigator Niles Lance is about to discover, sometimes it's better for the missing to stay missing. Line art by Marcelo Salaza and colors by Matheus Bronca. Empress co-produced with Brian Barr. Thriller.
IV: Snake: Issue 01
Homecoming: Part 01 - Snake is a former outlaw on a quest for redemption. Along the way she dishes out comeuppances to local Cambra bullies. Lines Alex Reis, colors Nimesh Morarji. Western.

V: Bang Bang Lucita: Issue 01
Bang Bang: Part 01 - Lucita teams up with President Ulysses S. Grant to rescue the First Lady from a gang of outlaws. Things aren't quite what they seem as mysterious forces seem to have their hands in things. Adventure and humor collide in this fun tale. Lines Edson Alves, colors Nimesh Morarji. Western.

The Sovereigns
The epic that will redefine the Gold Key heroes continues! The year is 2025, Turok has gone missing and Magnus is good and worried about that. When even a time traveling mission to confer with Doctor Spektor and the creature once known as Solar don't yield any answers, Magnus must brave the unknown to track the missing hero down. Plus: An all-new Magnus backup by Kyle Higgins and Jorge Fornés tha 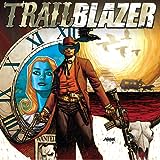 Trailblazer
Special digital-only edition with the original script, exclusive to comiXology! When the woman that raised him is murdered, an assassin turns states evidence against his employers and is given a once in a lifetime chance to enter Operation Trailblazer - the most unique witness protection program in the world. Sent back in time to the Old West, the assassin begins a new life, but it isn't long bef 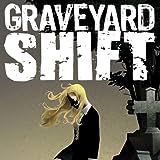 Graveyard Shift
Reunited after their memorable run on the critically acclaimed NOBLE CAUSES, JAY FAERBER and FRAN BUENO bring you a new tale of crime, horror, and romance! It's Fright Night-style thrills and Castle-style crime-solving as a homicide detective and his girlfriend find their love put to the ultimate test when they run afoul of a gang of vampires! 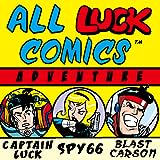 All Luck Comics Adventure
All new action adventure anthology with three brand new features! Captain Luck: Treasure hunters tangle with trouble in the Bermuda Triangle. Spy 66: A rookie spy girl attempts to make her mark in the superspy era of the mid 1960's. And Blast Carson crash lands on the wet and wild world of Mars 1,000,000 B.C.!