Journey To Star Wars: The Rise Of Skywalker - Allegiance

Journey To Star Wars: The Rise Of Skywalker - Allegiance
3.7
(193 ratings)

THE DECADES-SPANNING SKYWALKER SAGA NEARS ITS CLIMACTIC CONCLUSION! Before the exciting events of Star Wars: The Rise Of Skywalker! Hounded by the FIRST ORDER across the galaxy, the RESISTANCE is in dire need of ships, weapons and recruits to make a final stand against KYLO REN’S forces. Desperation drives a delegation led by GENERAL LEIA ORGANA and REY to entreat the Rebel veteran’s one-time allies, THE MON CALAMARI, to join the fight — but decades after Imperial occupation enslaved their planet, there are those willing to stop at nothing to prevent another war from bloodying the waters of Mon Cala. A system away, POE DAMERON and FINN have their own mission: to hunt down a weapons cache on the remote moon of Avedot, unaware that they are being hunted by the most notorious criminal gang in the galaxy.
See More See Less 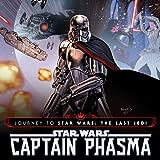 Journey to Star Wars: The Last Jedi - Captain Phasma (2017)
Collecting Journey to Star Wars: The Last Jedi - Captain Phasma #1-4. What happened to Captain Phasma after Star Wars Episode VII: The Force Awakens? Writer Kelly Thompson (HAWKEYE) and artist Marco Checchetto (AVENGERS WORLD, PUNISHER, GAMORA) expand Captain Phasma's story and reveal how she escaped the destruction of Starkiller Base. It's the stunning lead-in to this winter's blockbuster big-
Journey to Star Wars: The Force Awakens - Shattered Empire
Emperor Palpatine's twenty-year reign of terror came to an abrupt and fiery end in the skies above the forest moon of Endor. A decisive victory for the Rebel Alliance, to be sure, but even with the loss of its leadership, the Empire's Moffs and regional governors retained their hold on important systems from the Core to the Outer Rim, thanks to the might of the Imperial Starfleet. Now, with a powe
Star Wars: Age Of Resistance (2019)
Collects Star Wars: Age Of Resistance - Captain Phasma, Finn, General Hux, Kylo Ren, Poe Dameron, Rey, Rose Tico, Supreme Leader Snoke And Special. Concluding the Age of Star Wars - epic adventures featuring your favorite characters from all three film trilogies! This final volume spotlights the heroes of the Resistance and the villains of the First Order! Witness the moments that define them a
Star Wars: Poe Dameron (2016-2018)
AN ALL-NEW ONGOING SERIES SPINNING OUT OF STAR WARS: THE FORCE AWAKENS! Poe Dameron, former Republic flyer turned Resistance fighter, is the best pilot in the galaxy. Hand-picked for the resistance by General Leia Organa to lead a squadron on a top secret and vital mission...Poe sets off investigating sites of historical importance to the Force. Revealing backstory leading directly into the holid