In 1987, a new generation of the World's Greatest Super-Heroes took center stage. But they were the most unlikely grouping of heroes you'd ever expect!

The adventures of the classic comedy/action era of the Justice can be found in this collection. This incarnation of the League features Batman, Blue Beetle, Martian Manhunter, Guy Gardner, Black Canary, Mister Miracle, Dr. Fate, Booster Gold, Doctor Light, and the power of Shazam! Included here are JUSTICE LEAGUE ANNUAL #1, JUSTICE LEAGUE INTERNATIONAL #8-13 and SUICIDE SQUAD #13.

Rediscover the book that redefined the term ""super-hero team!"" for a generation.
See More See Less 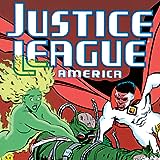